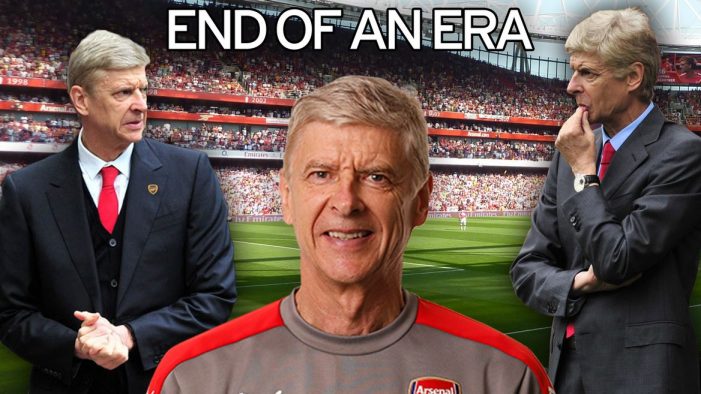 With one of the biggest surprises of the year, Arsenal just announced that Arsène Wenger will be leaving at the end of the season. This brings an end to a trophy-laden and turbulent 22-year association between the Frenchman and the club.

The Frenchman, 68, had another year left on his deal but will leave the club at the end of the current campaign.

He announced the news in an emotional letter to the club’s supporters that stated;

“After careful consideration and following discussions with the club, I feel it is the right time for me to step down at the end of the season. I am grateful for having had the privilege to serve the club for so many memorable years, I managed the club with full commitment and integrity. I want to thank the staff, the players, the directors and the fans who make this club so special. I urge our fans to stand behind the team to finish on  high, to all the Arsenal lovers take care of the values of the club. My love and support for ever.”

Arsenal confirmed they will appoint Wenger‘s successor “as soon as possible” with the likes of Carlo Ancelotti, Leonardo Jardim and Thomas Tuchel among the frontrunners.

Wenger had informed the squad of his decision during training before their home match against West Ham on Sunday. Wenger has previously insisted he “turned down the world” to stay in north London  but his stature has fallen in recent years amid growing pressure for him to walk away.

Wenger had signed a fresh two-year contract extension just last summer. At that time itself, there were speculations that the 68-year-old would end up leaving halfway through the deal. However, very few people actually thought that this is something that would happen before the current campaign ends. Especially with the Europa league semi-final coming up.

Back in 1996 when Wenger started out, he was relatively unknown. However, after he led the club to the double in his first full season in charge, he quickly rose to prominence and became what we could now consider, a revolutionary figure. He is majorly credited for tapping into the overseas market and for finding talents that no one had heard of. These players went on to become world-class talents and have played for some of the best clubs in the world.

For many Arsenal fans, this announcement is something they’ve actually been waiting for. It’s no surprise that the resident angry man hasn’t been everyone’s cup of tea. Instagram and Twitter are abuzz with the hashtag #WengerOut! Wenger however, never seemed fazed by this. He has remained completely oblivious to the resentment. This announcement suggests that he has finally accepted the fact that he can no longer take the club forward.

Premier League Manager of the Month (15)