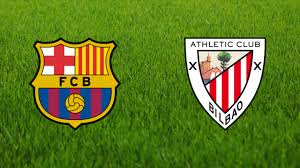 Barcelona welcome Athletic Bilbao at Camp Nou on Saturday having had their first 2-1 defeat of the season at the hands of relegation threatened Leganes on Wednesday.

Meanwhile, Atletic Bilbao had the same embarrassing night on Wednesday when they fell on a tough Villareal that beat them 3-0 at home with goals from Pablo Fornals, Ramiro Funes Mori and Karl Toko Ekambi.

Former Arsenal Captain Thomas Vermaelen and Munir El Haddadi will have to get a seat on the bench after having not impressed manager Valvede on Wednesday to pave way for Alba and Luis Suarez.Striker Luis Suarez and Jordi Alba will be recalled back in the starting line-up after being rested on against Leganes.

Philippe Coutinho is hoped to maintain his position in the midfield together with Sergio Busquets and Ivan Rakitic. Then Lionel Messi and Ousmane Dembele flanking Suarez up top.

With Barcelona team news, Clement Lenglet is back after serving his one match ban after receiving a red card during a clash with Girona. Gerard Pique and Samuel Umtiti are also available for the start.

Athletic Bilbao’s Aritz Aduriz remains sidelined with a muscle injury he picked in his first game of the 2018/19 season.