Edinson Cavani’s father, Luis, has admitted the striker “does not feel comfortable” in England and wants to leave Manchester United for Boca Juniors, when his contract expires at the end of the season.

The 34-year-old joined United last summer on a free transfer, after seven years at Paris Saint-Germain.

Cavani has gone on to prove himself at Old Trafford, scoring seven goals in 25 appearances in all competitions.

While United are open to the idea of extending his stay beyond this summer, his father has come out to say his son’s future lies in South America.

“My son does not feel comfortable in England and wants to be close to the family again.

“Edinson is going to end up playing in South America.

“I want Edinson to play in a team that fights for something important.

“Edinson had many conversations with Juan Roman Riquelme (Boca vice-president) and he would like to play for Boca,” Luis told TyC Sports. 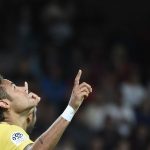