His appointment has been announced by Vision Group’s Chairperson, Mr. Patrick Ayota.

Don replaces Robert Kabushenga who resigned as CEO of Vision Group in January, a position he had held since October 2006.

Kabushenga took it on twitter to congratulate Wanyama upon getting what he called “the best job in uganda.

“Congratulations on getting one of the best jobs in Uganda. All the best,” Kabushenga tweeted.

Wanyama has been a senior presidential press secretary since 2016. 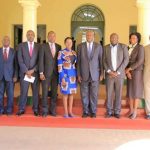 Museveni to Address the Nation Every Sunday, Don Wanyama