Final year students of Kyambogo University are unhappy about the hiking of hostel fees by the owners.

Kyambogo University reopened the institution on 17th October for final year students for a period of six weeks. Some students started reporting in various hostels to get ready for the reopening this week before reopening date.

The students say most of them had cleared the hostel fees before they went home in March, so for the remaining period of six weeks, they expect the hostel to charge them less money. They argue that the University assured them that hostel owners would not charge them.

Professor Elli Katunguka the Vice Chancellor Kyambogo University, in his reopening speech said the management had negotiated with some hostel owners and agreed that the hostel fees which the students had paid for semester two will be carried forward to cater for this period to enable the students complete their studies.

When Uganda Radio Network-URN visited a number of hostels last week, the owners revealed that the University should know that when students are in hostels, they use a variety of services which include water and electricity, hostel shuttles and the hostel has to pay the services providers. Therefore, they say, it is not possible to do what the university wants them to do.

Annet Nabirye, a finalist who stays at Choice hostel in Banda reveals to URN that when she reported, the custodian notified her that she has to pay shillings 400,000 which she says she will not handle.

Nabirye says she is still waiting for the rest of the students who have not yet reported to forge a way forward. She adds that if they insist on that money, she will go and look for other options.

URN learnt that some hostels around Kyambogo University have increased accommodation fees. They had said they will charge between 150,000 and 200,000 shillings. However, the students reveal that some are being told to pay shillings 400,000 for a period of six weeks.

John Kato, another third year finalist says in his hostel which he did not mention, he was told that they will be paying half of what they used to pay. He used to pay 550,000 shillings and now he is told to pay a half of that. However before he forks out the 250,000 shillings, he says he will wait for the rest to see what they can do.

One of the female students at the university who preferred anonymity told URN that in her hostel, the custodian gave them a deadline of ninth to have completed clearing with them if not, a late payment surcharge of shillings 100,000 will be added. She says they are paying shillings 400,000 each for a single room.

URN further established that the situation is worse with rented rooms where landlords have significantly increased rent simply because students will not be allowed to share the rooms, so one person is liable for the entire room.

Both hostels and rentals are owned by private individuals while universities have halls of residence which largely accommodate government-sponsored students.

Jonathan Tundulu, the guild president says as student leaders, they have organized a committee that is going to hold fresh negotiations between hostel owners and the administration to see the way forward of this matter.

Professor Elli Katunguka when asked about this matter, notes that private hostels are owned by people as their business therefore, each might want to do whatever they want. However, he promised that they will engage them more to see how students can be helped. 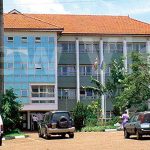