At a young age of 22-years, PSG have signed an exceptional talent having seen his contract with AC Milan run down having been at the club since 2013.

Donnarumma was handed his Milan debut aged 16 in 2015 and ended up making over 200 Serie A appearances for them.

The new PSG player holds 33 senior caps, after helping Italy win Euro 2020 and being named player of the tournament.

His efforts included keeping three clean sheets and saving one penalty in the shootout in the semi-finals against Spain and then two more in the one that settled the final between the Azzurri and England at Wembley.

‘We congratulate him on his victory at Euro 2020, and his title as the best player of the competition.

‘I know Gianluigi will receive a warm welcome from everyone at the club, including his teammates, our staff and all the Parisian support.’

Donnarumma said in quotes on PSG’s official website: ‘I am very happy to be part of this great club that is Paris St Germain.

‘I feel ready to take on this new challenge, and continue to grow here. With Paris, I want to win as much as possible and give joy to the supporters.’ 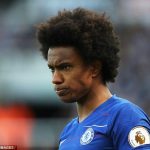 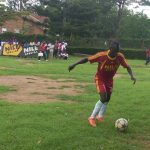