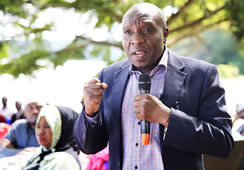 The staff at Islamic University in Uganda (IUIU) have been tasked to maintain the values and norms upon which the institution was built so as to maintain its positive image and academic excellence.

Dr. Abdul Kaziba Mpata, the Vice Rector in charge of Finance and Administration made the call during the 2018 International Labor day and the University’s 14th staff party at Jinja sailing club in Jinja town.

“I would like to say that we are being challenged whether the mission of our founders still exits during our time” He said.

The Vice Rectors’ call follows recent misinformation in the media about the suspension of 23 students over indiscipline cases involving pre-marital pregnancies, alcoholism and drug abuse.

He noted that as the University staff, their responsibility is to make sure they don’t spoil the institution for which their own children are to study in the years to come by relying on inaccurate information circulating in the papers and other media outlets aimed at undermining the University’s moral settings.

“It is of great importance that together with our families we stand as one and maintain the Islamic University in Uganda as it was started by our founding fathers” Dr. Mpaata stated.

Meanwhile the University Rector Dr. Ahmad Kawesa Sengendo also noted that the future of the University has to be made with collective efforts from both the Staff and the administrators.

“I want to suggest to the IUASA and IUASSA that we have a new chapter of working together to address our challenges” he said.

The Rector noted that unlike in 1974 when the idea of starting the Islamic Institution was initiated, today a lot of things have changed and the greater Muslim world faces a lot of challenges that makes it hard for them to mainly focus on solving issues of IUIU.

He urged the staff to be proactive and ensure they find solutions to the challenges internally.