Uganda’s Jacob Kiplimo did it again on Saturday after he won a second gold medal in the 5000m race at the Commonwealth Games in Birmingham.

Having earlier won gold in the men’s 10,000m final, the 21-year-old Ugandan runner reciprocated the form, beating Kenyans to the podium and showing them a clean pair of heels.

By posting a time of 3.08.08, Kiplimo ran his seasonal best so far in the 5000m race to ensure he bagged his second medal at the ongoing Commonwealth Games in Birmingham, the first one in the 10000 metre race.

The win also ensured Uganda now has five medals at the ongoing Commonwealth Games, three of which are gold and two bronzes.

“It was a wonderful performance for me.I have two gold medals and I’m so happy about it,” Kiplimo said. 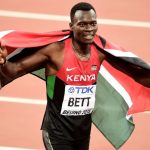