Janet Kamukama was a second-year Industrial Chemistry student at Kampala International University(KIU) who failed in a well and died while trying to fetch water.

22 year old, was general-secretary of the KIU Industrial Chemists Community.

According to Shadrak Muhabura, the president of KIU Industrial Chemists Community, Kamukama fell in a well and died while trying to fetch water on Tuesday afternoon near her home village, Bbaale in Kayunga district.

“She died yesterday, while she was trying to get water fell and drowned,” Muhabura reported.

Several classmates and fellow students have since taken to social media to eulogise her, with many describing her as friendly, playful, hardworking and an enthusiastic academician and young leader.

“We have lost a real Industrial Chemist. Janet was an enthusiastic young leader and a potential academician. She was one of the student leaders acting as general secretary of KIUICC,” KIUICC president Shadrak Muhabura wrote on his WhatsApp status.

“It is unbelievable that Janet has gone,” Praize Tumuramye, the President of the KIU NRM chapter commented.

May her soul rest in eternal peace. 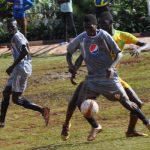