Kwame Nkrumah’s daughter at Makerere for the ALSC signing 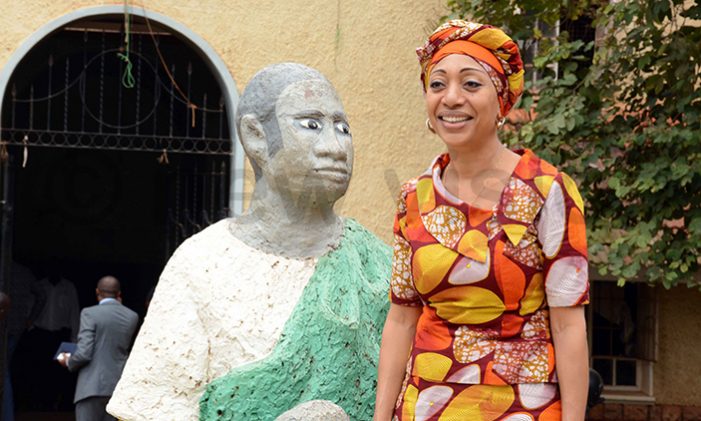 Samia Cristiana Yaba, has visited  Makerere  University for the first time to witness the signing of a memorandum of understanding between the University and the Africa Strategic Leadership Center in collaboration with leaders from the public and private sectors..

Yaba , is the only daughter to the legendary Pan Africanist and the first President of Ghana, Kwame Nkrumah from his Egyptian wife, Fathia Halima Rizk.

At the age of 58, she is the leader of the Convention People’s Party in Ghana and founding president of Kwame Nkrumah Pan African Center.

Samia was also present at the launch of ASLC on Tuesday  at sheraton hotel where she emphasized building consensus for African development and unity.

She urged the the ASLC board to keep the spirit they have hard in at the launch and engage more students, adding that the initiative had created a lot of expectations.

After the signing of the MOU, Samia also checked-in at Nkrumah hall, a male students’ hall of residence at the campus, where her father,s sculpture stands out prominently in the compound.

She was so amused as she requested to pose for a photo besides the sculpture.

Yaba was later introduced to the warden John Kamya, who previledged as well to see her.

Nkrumah’s sculpture was put up in recognition of his legendary pan Africanist works and ideas.

The ASLC was officially launched by the Prime Minister Ruhakana Rugunda  under the theme; Positioning Africa for the 21st Century and  intends to partner with the university since it boasts of the highest number of human resource, including 60 professors who would collaborate in conducting research in agriculture, food security and climate change, economy, industry and business, leadership and governance as well as peace and security.

The launch of the center is in preparation of the annual Africa Now Congress in March next year, which is expected to host no less than 15 heads of state to deliberate on a number of issues.

“Surprisingly, the African Forum is hosted in Europe, but we must change this and host in Africa and find solutions to our problems by ourselves,” Mwesigwa stated.

Makerere university: Campaigning with bands is a violation against students’ Rights – Lubega Henry

UP Close with Outgoing Youth Speaker of Parliament Winnie Adur