Police have arrested Anna Adeke, the Guild president of Makerere university and seven other students.

Adeke was marching with a group of students holding tree branches and placards to the city centre in protest of the university’s closure.

The students are demanding for the reopening of the oldest public university in Uganda.  Makerere university was closed last week over the ongoing staff strike.

Makerere university staff are demanding for the fulfillment of the promised 1oo percent salary increment that was approved by the university council in May this year.

However, Government says there is no money for the salary increment. 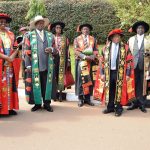