A number of Makerere University students including their Guild President Bala David Bwiruka have been arrested following a demonstration aimed at scrapping off the 100% tuition payment policy.

Makerere university tuition payment policy requires a student to have cleared all the tuition/fees by the sixth week of each semester.

Other students arrested include the Chairman Mitchell Hall, Hon. Jacinto Okello a GRC of School of Liberals plus many other students.

According to the Guild Information Minister, Davidson Ndyabahika, Police first held the guild president in University Hall where he resides in the morning.

When he managed to get out of the hall, Bala David Bwiruka was immateriality arrested by police and taken to a place yet to be known.

“We urge students to take positions as we cannot allow such unscrupulous and dishonest policies rein in Makerere University. We must stand firm in such a situation and fight together such merciless tendencies of the state,” Davidson Ndyabahika says .

Davidson Ndyabahika notes that they have received information that the State thinks that students’ strike is politically motivated by Amama Mbabazi, the former Prime minister of Uganda.

“We want to clear such misguided rumors. We are for students and the issues referred in here do not affect Mbabazi or any other politician but affects the students and our parents”, says Davidson Ndyabahika.

As the situation worsened with police firing bullets and teargas at the largest and oldest public university in Uganda, many students were injured in the process.

Namata Cissy a third year student of a Bachelor of arts in Tourism collapsed after police fired a teargas canister at the sixth floor of MaryStuart Hall.

Makerere University Council on Tuesday 6th October maintained that the fees payment policy can not be scrapped off; as the students demand. 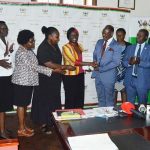 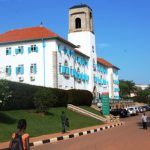 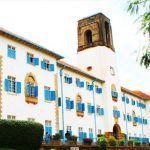