Ugandans like many people in different parts of the world are gearing up for the 2015 target for the achievement of Millennium Development Goals (MDGs). As discussions for the post 2015 Development agenda gain momentum, Pascal Kwesiga looks at the  status of Uganda on achievement of each of the eight MDGs, what Ugandans know about the MDGs and what different sections of Uganda’s think are their own development goals.

Each goal has specific targets and dates for achieving those targets. It should be noted that efforts have been made by countries including Uganda to have these goals achieved.

But as the 2015 deadline for MDGs gets closer, countries are making last minute efforts to try to achieve the goals. It’s therefore against this background that I found it relevant to examine Uganda’s performance and engage development experts about the suitable post 2015 development framework.

Here is a graphical presentation of the MDGs and an analysis of Uganda’s performance. Click on the tabs below to see how Uganda performed on the different aspects of each of the MDGs.


BUT WHAT DO ORDINARY PEOPLE THINK ABOUT MDGs?

While the statics from the UN show a mix of achievements on some targets and a struggle on some for Uganda, there has been concern that many Ugandans do not know or care about MDGs or take them to be their own development goals.

Here below are audio recordings and videos presenting how Ugandans understand MDGs, what the government of Uganda can do to improve people’s livelihoods, people’s personal development goals (are their goals included in the MDGs?) and experts weighing in on the relevance of MDGs for Uganda and the key development issues that government should tackle in the post 2015 development agenda.


1.  Esther Kisakye 11, a Primary Six pupil at Victor Junior School in Nabbingo village on Kampala-Masaka High way
listen to ‘What are MDGs? ’ on Audioboo

2.  Denis Mukiibi 30, a teacher at Victorious Primary School in Mpigi District in Uganda explaining the meaning of MDGs.

listen to ‘What are MDGs? ’ on Audioboo

What can government do?


Here I present the interviews I carried out on the issues people think Government should address to improve their livelihoods. Below are the responses in text and the respondents in pictures 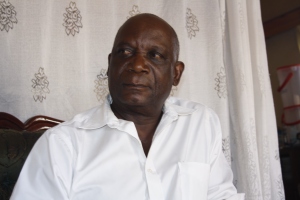 employment opportunities for its people.
George Ssemukaya 54, LCI chairman, Kawaala village in Kampala.There are many people in my area who cannot afford a decent meal a day because they are unemployed. The number of unemployed people is growing by day and they are a security threat to others and the government. There is need for the government to invest in programs that will create

Brenda Murungi 20, a resident in Ntinda, a Kampala suburb. I would like to see the government investing heavily in the education and health system. The quality of service delivery in government health facilities and schools is very poor mainly due limited funding to these sectors. I think there is no point in sending children to school where they are not receiving the necessary knowledge to enable them compete with others in other parts of the World.

Able Mukisa 15, a Student at Kawaala High School in Kampala.I want the government to invest more in football to enable me develop my talent. Football has employed many people across the world because some governments have invested heavily in football. I am part of a big number of youth who have potential to become international footballers if the governments put in place the necessary facilities to develop our talents.

Here I present the interviews i carried out on the peoples’ personal development goals. Below are their responses

Paul Wanyama, an economist and principal of Global Professional College in Kampala, Uganda.

Julius Kiiza, a political economist and policy analyst. He is also a lecturer in the Department of Political Science at Makerere University in Kampala, Uganda

Uganda and the Development Goals– The Guardian