Museveni Apologizes to Kenya On Behalf Of His Son

President Museveni on Tuesday, 4 October, 2022 promoted First Son Lt. Gen. Muhoozi Kainerugaba to the rank of full General, which is one of the highest ranks in the military.

However, the President dropped him as the commander land forces of the Uganda Peoples Defence Forces. Muhoozi was replaced by Maj. Gen. Kayanja Muhanga, who was heading Operation Shujaa in the DR Congo and in turn also promoted to the rank of Lt. Gen.

Whereas many wondered about the motive with lots of speculation on social media, President Museveni on Wednesday came out to explain his motive. 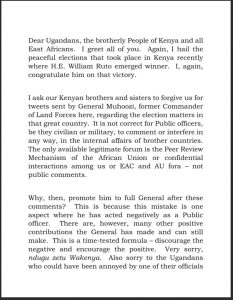 His message is carried in an open letter he wrote on Wednesday apologizing to Kenyans regarding the tweets that General Muhoozi Kainerugaba sent out on 3rd October 2022, about capturing Nairobi.

“I ask our Kenyan brothers and sisters to forgive us about tweets sent by General Muhoozi, former commander of Land Forces here, regarding election matters in that great country.

It is not correct for public officers, be they civilian or military to comment or interfere in any way in the internal affairs of brother countries,” Museveni wrote.

He continued: “Why then promote him to full General after these comments? This is because this mistake is one aspect where he has acted negatively as a public officer. There are, however, many other positive contributions that the General has made and can still make. This is a time -tested formula- discourage the negative and encourage the positive,”

Muhoozi will remain the Senior Presidential Advisor on Military operations.