Butanda Yusuf a fourth year student and an elder of University  Hall at Makerere university says that for the four years he has leaved to see guild candidates respecting culture but 2015 is the worst year ever.

“Some candidates come with 2000 shillings notes to deposit in each box, yet in the past it has always been 50,000 and above, we are so disappointed”, he said.
However, Guild candidates attribute this to the so many boxes that have been introduced this year at the different halls of residence.

Namulindwa Sarah for example had failed to deposit money in the 8th box at University hall because she had planned for only 5boxes.

A total of 8 candidates are contesting for the post of Makerere university Guild President for the year 2015/16.

Campaigns kicked off on Friday 27th February 2015 at Livingstone Hall and students of Makerere university will vote their next Guild President on 13th March 2015. 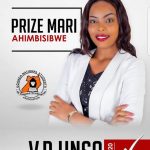