Prof. Baryamureeba calls for a political debate with President Museveni

I was not disappointed by the comments made by President Museveni when he asserted that I am a young boy who failed to manage Makerere University and that he doubted my capacity to manage this country. It only affirmed my impression of him as a person who is of advanced age and has no more capacity to keep tabs of what is going on and has no idea what is happening on the ground in Uganda.

Of course I know that President Museveni has grown very intolerant of anybody who threatens his hold onto power. It is the reason that he has gone an extra mile to forget the above as seen in his attacks over my personality.

Interestingly, the attack over my management capacity didn’t catch my attention as much as his reference to me as a young boy. From his comments, I now understand why less has been done by President Museveni’s government to address issues that concern youths like education, job creation among others.
Interestingly when President Museveni first became President of Uganda in 1986, he was only 41 years of age. At the time, I was only sixteen.

Thirty years later, President Museveni thinks a person in their 40s can’t manage Uganda! Indeed he will go an extra mile to forget certain facts in the name of intolerance.
Let me just clarify one small thing to my President and probably his advisors.

Since 1986, there have been many prominent world leaders who first assumed office when they were either my age or even younger. Let me mention a few who are still serving world leaders. President Barack Obama became President of the United States of America in 2008 at the age 47; David Cameron became Prime Minister of the United Kingdom at the age of 46 in 2010 and in October 2015, Justin Trudeau became the Prime Minister of Canada at the age of 43. I would want to know if to him these world leaders also lay in the category of ‘’young boys’’ when they assumed office. Of course we all know they have been great leaders.

I am proud to be the youngest Presidential Candidate in the race at the age of 46. More so, I am happy to have come up with an all-inclusive manifesto that addresses issues of both the young boys/girls (as the President referred to us) and all other Ugandans. I am also happy to bring insights of new generational access to the decision making arena.

To avoid going back and forth on this discussion, I would like to offer myself for a public political debate with H.E President Yoweri Museveni as we ponder on issues that affect Ugandans and not each other’s ages. It is in such debates that we can be able to engage in mature politics.

Finally, I want to assure all my supporters that as a 46 year old adult, I have a legacy of strong management competence and I am mature enough to manage this country and I look forward to having more people my age and younger as part of my government.

The writer,Prof. Baryamureeba is one of the Presidential aspirants in Uganda for the general elections set for February 2016. 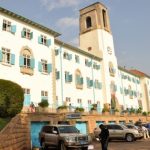 To Vote or Not to Vote Part 2: Is the Declining Voter Turn Up a Reflection of Lost Hope