Cristiano Ronaldo came off the bench, scored a sensational goal to give Real Madrid the lead and, moments later, was sent off.

Gerard Pique’s own goal opened the scoring, before Luis Suarez was brought down by Keylor Navas and Lionel Messi equalised from the spot.

Real Madrid beat Barcelona 3-0 and Christano Ronaldo after scoring,celebrated like Lionel Messi by removing his jersey which made the refree to give him a yellow card.

The “shirt off” celebration appears to be a dig at fierce rival Messi as the Barcelona striker celebrated in the same way when he netted last season against Real Madrid towards the end of the season. 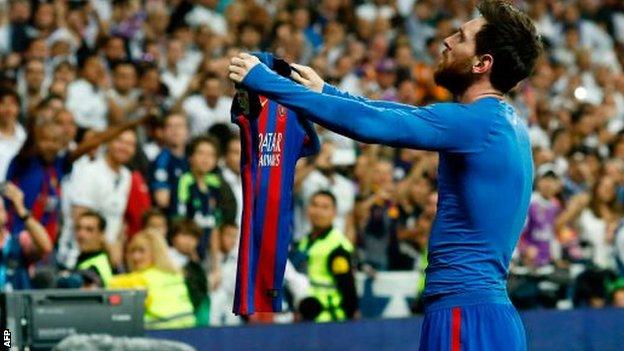 He then had a penalty shout but  the referee adjudged him to have taken a dive under pressure from Samuel Umtiti.

The referee had no hesitation in showing another yellow card to Ronaldo who was then given his marching orders.

Ronaldo refused to go quietly and appeared to push the official in the back before leaving the pitch.