Seven babies died at Zimbabwe’s Central Harare Hospital on Monday night because they were not given emergency treatment because of staffing issues which caused understaffing at the hospital, according to the BBC.

The understaffing was caused by an ongoing nationwide strike by nurses who are protesting lack of adequate Personal Protection Equipment (PPE).

The lack of adequate staff on duty caused the maternity wards at the hospital to be overcrowded and the seven babies (bodies wrapped in green cloth in the picture), who needed urgent treatment after their mothers underwent caesarean sections, could not be attended to and were stillborn.

Zimbabwe is grappling with a procurement crisis which led to the country’s health minister to be sacked.

Many African countries are struggling to procure enough PPE in time because of mainly corruption-related issues. 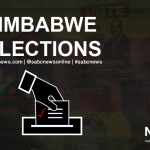 Zimbabwe goes to the polls first time in post-Mugabe election