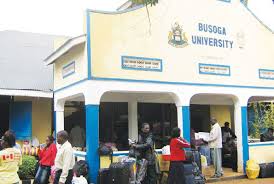 State Minister for Higher Education, Dr.John Chrysostom Muyingo has warned parents and students against accepting anyone who will approach them in line with procuring an admission at Busoga University.

Dr. Muyingo said the University is still closed to all academic operations until an official notice from the government.

During an audit session at the University that commenced Wednesday February 20, 2019, the Minister assured reporters that Busoga University will resume operations as a government entity after a thorough inspection.

Dr. Muyingo was also appointed by the president to act as chairman of the audit team from the Auditor General’s office who will also seek to establish the university’s financial management, staffing and student population records.

Busoga University National Council of Higher Education (NCHE) for lack of minimum standards and the president ordered that it should be taken over by the government.