RE: VARIOUS CORRESPONDENCES IN THE PRESS ATTRIBUTED TO YOU

As my contract comes to an end, I have reflected on the various things that are taking place at the moment, the various articles in newsletters and posts in social media and I have thought that it will be unfortunate if I left without either responding to them or clarifying on the various issues that you have raised as Chairman of Council have said or done.

i) MUBS has been and I believe continues to be a wonderful institution which we have served diligently going through numerous challenges as is expected in anybody’s life or organization life. We have built an institution with a very high reputation, admired by all and sundry.

ii) At the request of the then Minister of Education and Sports, I recommended you to MUBS Management and we nominated you as a member of the Council from the public and we agreed internally that given the support you gave us when you were Vice Chancellor Makerere University, your academic credentials and knowledge of the education sector, we should support you to be Chairman of Council and this indeed came to pass. While you were not perfect, you did a great job during the first term a basis of which we gave you a second term. This was despite advice from numerous people who had worked or interacted with you.

iii) During your term, you and I communicated in various ways and met to discuss institutional issues and find solutions. I believe we both know one another’s weaknesses in our interactions. However, with time I noted a breakdown in this communication especially when you would take decisions in Council that were against Management’s positions including silencing those who wanted to speak in meetings. This is common knowledge among different Council members though in the African culture, there is a saying that when a king is naked, you never say he is naked. This matter is in the grapevine in the institution. Many members were surprised you chose to listen to individuals rather than the collective voice of Management.

iv) Your actions have led to a schism within MUBS staff based on those who are said to be your supporters and the rest of the innocent staff who do not know what is taking place. It is those staff who have actually indicated to many people in the institution that you had aspirations of becoming the Principal and subsequently the Vice Chancellor. It is said, I hope it is not true, that you wanted MUBS to attain university status after I have left so that rather than being the Principal, you will be the Vice Chancellor of MUBS.

v) In January this year, you wrote me a very abusive email (Annexure I) humiliating me and on reflecting on it and after consultation with various Members of Council, I did not respond because I wanted to build goodwill in the institution. In one of the meetings, I am on record having stated that you should not micro-manage the institution and you should give Management an opportunity to do its work.

vi) As you chose to become the Executive Chairman of MUBS Council (a chairman who handles day to day issues of the institution), you decided to act on many issues without consultation with the substantive Principal or your colleagues in Council. Among the things you did are the following;

a) Chose to interfere in the process of an appeal by staff who had been dismissed (Annexure II). While you were Chairman of Council, there is a substantive Chairman of Appointments Board which had taken a decision on these staff. It should have been the Chairman of the Appointments Board to inquire if at all on the fate of the process of appeal. It was unprofessional that having decided to dismiss the staff you personally went ahead to find out whether they had appealed or not. This was definitely interfering in a job that was not yours.

b) Management sat and did its job and decided to write to the Solicitor General over this matter. Before Management wrote, you took it upon yourself to write to the Solicitor General (Annexure III) and personally followed up to get responses from there. I would imagine this would be influence peddling if it is true. If you did not, forgive me for saying so.

d) Recently, Makerere University gave us instructions to raise fees (Annexure VI). I responded to the Vice Chancellor and we had an amicable agreement over this matter but before I knew it, you wrote a letter (Annexure VII) which was also availed to the press. Again taking over a responsibility that is not yours. We were embarrassed by these correspondences.

e) Dr. Geofrey Kituyi who was recently elected Dean of the Faculty of Vocational and Distance Education wrote to the Chairman of Appointments Board (Annexure VIII) regarding his instruments following his election. While Kituyi’s letter was also misdirected, you chose to respond to him to the embarrassment of all of us, yourself, Appointments Board and Management (Annexure IX).

These are issues of governance and the ideal situation is the Chairman of Council to seek clarification and/or guidance from the Principal rather than deal with the matters himself because if he does so, he is undermining the authority of the Principal and Management. He is taking over the day to day management of the institution which is micro-management. This is what you have been doing.

vii) Sometime in March, I received a copy of your letter to the Minister of Education and Sports recommending me for reappointment for the position of Principal (Annexure X). I was shocked because you did not consult me. I later on gathered that you did not circulate this letter other than to the Council members. I have come to believe that your recommendation was in bad faith and was intended to pre-empt my expression of interest to continue as Principal of MUBS if I had so wished. I have been serving MUBS with various objectives in mind and despite the recent destabilization of the institution by some of your decisions, I am satisfied that I have made my contribution not only to the institution but also to the country.

viii) Following some articles in the online press (Annexure XI & XII), I was invited by His Excellency the President over these articles. As a fountain of honor I cannot divulge our discussions because it will be a breach of trust however the conclusion was I should continue to serve MUBS since you had recommended me. 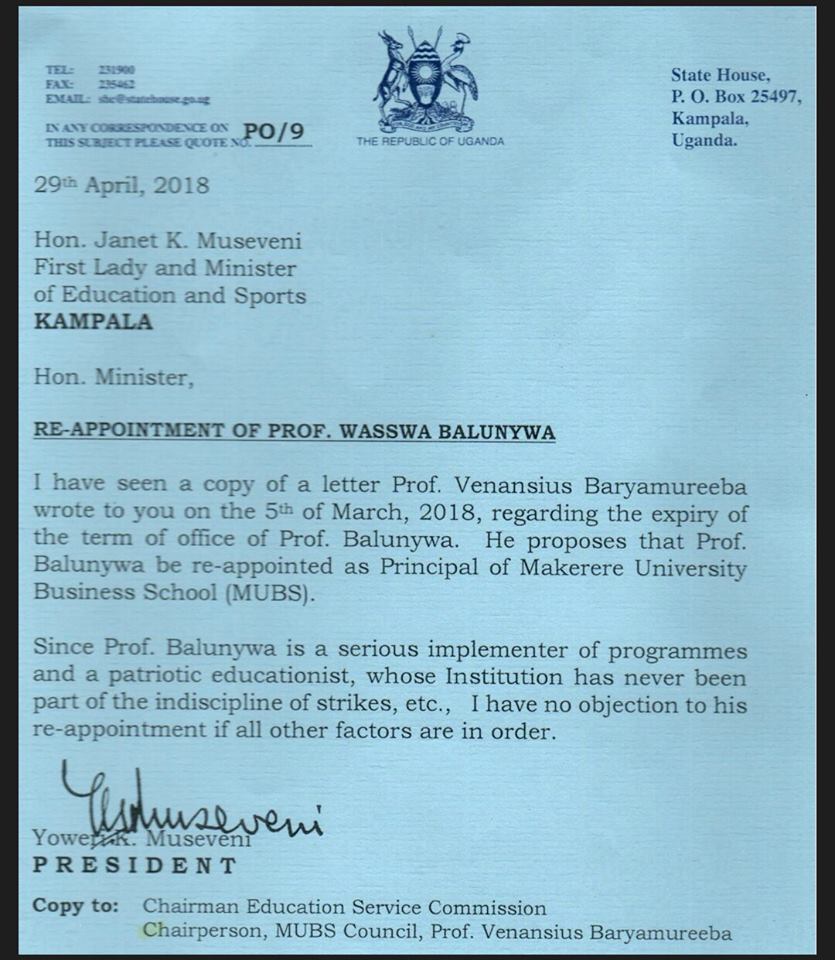 ix) I have learnt that on receipt of the copy of the letter to the Minister of Education and Sports by His Excellency the President, you chose to disown your first letter recommending me for the position. You appeared on NBS and I have seen comments attributed to you in the press (Annexure XIII) that I am not eligible for re-appointment as Principal of MUBS arising from an obscure law. I believe the Pensions Act is what you have cited. This law has nothing to do with appointment of Principals of Public Tertiary Institutions or for that matter even public universities. Having been a Vice Chancellor of a university, I am sure you know the age of the different former and current Vice Chancellors in the country.

x) The various press reports have attempted to create a negative image about me to the Minister and First lady. I believe your intention is to anger the First Lady and Minister of Education and Sports, the other Ministers of Education, the Permanent Secretary and make me a villain (Annexure XIII, XIV). I believe that the people concerned have no knowledge about me and my conduct but you have successfully alienated me from them. Unfortunately, not only have you succeeded in damaging my reputation but you have also been able to taint the image of MUBS and I believe from the various comments I have seen on social media, many members of the public have not spared you either.

xii) I had heard that you had availed the anonymous documents that had been moving round that were authored by the person who the School dismissed recently. You are aware that this person had sexually harassed numerous members of staff and student and this was a reason he was dismissed. However, he had in the process authored numerous documents intended to divert the attention of the School from his actions. Your email to me of January refers. From the Mulengera post, the concluding remark refers to these documents. Deep down in your heart, you know the truth but like I have now come to learn, when you disagree with somebody, you use everything available to you including falsities to discredit that person. I recall you telling me about the interpretation of your name.

xiii) Indeed as I have said, I would like to leave MUBS with honor and this honor is entirely in your hands as Chairman of Council. I have supported you since you took over as Vice Chancellor in Makerere University, in your term as Chairman of Council and I do not think I deserve this kind of treatment. I am not a perfect person but I believe I deserve some respect for the small contribution I have made.