VIDEO: Spice Diana demands for her Money on Stage in Masaka

According to the source, the Promoter is said to have since gone into hiding.

While on stage, Spice Diana paused her performance mid-show and started demanding her balance from events Promoter Mutima Robert.

She claimed that she invests a lot in her brand and even has people she pays but these people that hire her  take her for granted like she is a normal upcoming musician.

Mutima had hired Spice to perform for him at Masaka street jam they had agreed to give her the remaining balance after performing. 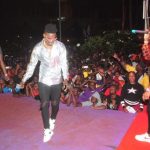