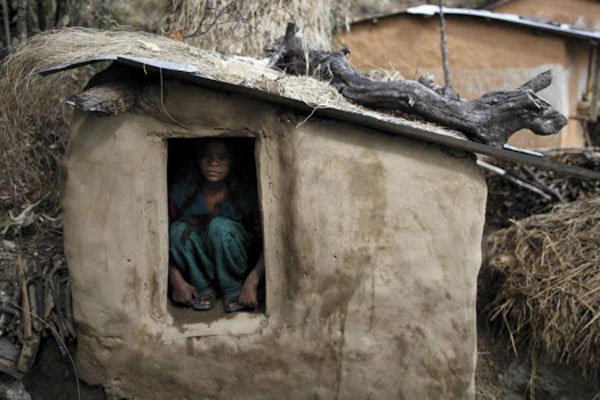 In the Nepal culture, it is a custom that every woman in her menstruation period is isolated from the rest of the community saying she is impure.

Girls and women are always locked up in the ‘menstruation hut’ with no window and proper ventilation upto the end of the cycle.

Although the practice was ruled unconstitutional, many people still recognize it.

According to a police report, a mother and her two children died of alleged smoke inhalation after spending a night in the hut.

Police said Amba Bohara, 35, fell asleep in the hut together with her two sons aged 12 and nine in western Bajura district on Tuesday .

The trio had huddled around a fire to stay warm in Nepal’s freezing winter conditions.
Local police chief Uddhab Singh Bhat told AFP the woman’s mother-in-law opened the hut the next day to find all three dead.
“We are waiting for the results of a postmortem to confirm the cause of death, but believe they died of suffocation,” Bhat told AFP. “We are investigating.”

Parts of the blankets sheltering the trio were burned, and Bohara had suffered burns to her legs.
The ancient shunning practice known as “chhaupadi” was outlawed in 2005 but is still enforced in parts of Nepal, particularly its remote and conservative western regions.

Last year, Kathmandu introduced three-months jail and a 3,000 rupee ($30) fine for anyone caught imposing chhaupadi.(Daily Monitor)
The practice is linked to Hinduism and considers women untouchable during menstruation and after childbirth.
Under Chhaupadi, women are barred from touching food, religious icons, cattle and men during their period and must sleep away from others.

The death of Bohara and her children are not the first linked to the practice.
Last year, a 21-year-old woman succumbed to smoke inhalation while banished to a hut, and other women have died from snake bites in the past.

The country’s National Human Rights Commission said police needed to do more to enforce the law.
“Women will continue to die unless there are consequences for enforcing this tradition,” said the commission’s Mohna Ansari