Popularly known for its attractive islands, Kalangala District is one of the best places one should think of visiting.  The tourism sites to visit range from islands, culturally called Ssesse islands, vegetation, historical monuments to caves.

Below is a list of sites to visit in Kalangala.

Ssesse Islands: The district is formed by 84 islands each with unique tourist attractions. Sixty six (66) of which are habitable according to Kasimu, the tour guide. One of these is Bugala Island.

Basing on information on the Uganda Tourism Board website, Bugala is the tenth-largest lake island in the world.

With an area of 275 km2 (106 sq mi), it is also the second largest island in Lake Victoria, after Tanzania’s Ukerewe Island, and the third largest lake island in Africa, after Ukerewe and Democratic Republic of the Congo’s Idjwi.

Below is a map showing the location of some of the islands on Lake Victoria in Uganda.

You can also watch the video below about Bugala Island.

Caves: There are caves on the different islands with Kalaya and Banga caves being the most outstanding ones.

While at Kalaya cave, one can see two entrances, a small one used for exit and wide that is normally used as the entrance.

The cave has a very good cultural and spiritual history according to the tour guides.

It is believed that people from different countries in the world go there to seek blessings.

The Mapeera Landmark, a site where the first set of Roman Catholic missionaries first set foot on the Ugandan soil.

This land mark is located at Bugoma in Mugoye Sub County in Kalangala district.

It is at this point Father Simeon Lourdel, commonly known as Mapeera,  and Brother Amans Delmas, are believed to have landed in 1879.

Forest Reserves: Kalangala also has a special forest from which Ddamula, an administrative mace and symbol of authority in Buganda is cut. 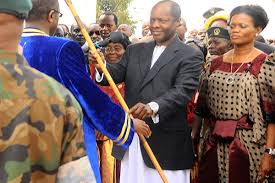 This is what the Buganda King hands over to someone appointed Katikkiro as a sign of authority.

Other sites to visit include:

Our tour guide Kassim explains the origin of Sesse island and the nomenclature of the different islands. #UMCStaffRetreat pic.twitter.com/PO1LaoM9C6

Kalangala was made a district in 1989, having been a sub-district of Masaka District.

How to get to Kalangala

Kasenyi and Kitubulu landing sites, in Wakiso District are the other major gateways into the district using private means of water transport.

Below is a map showing the routes one can use travel to Kalangala.