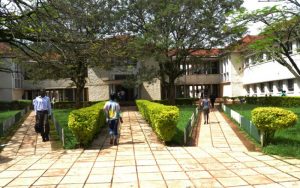 Makerere University students from the school of social sciences have gathered to demand for release of their Urban and Rural Development marks that have been missing since second year.

Results of over 400 students have never been recorded into the system nor have students received any hardcopy of their results from the lecturer. These students are finalizing their studies at the university.

The students claim that Dr.Anthony Okuku, the lecturer in charge cancelled out their results on allegations of cheating.  Students broke into the lecturer’s office and extracted him only to be rescued by the police.

One of the students, Charles Balekku says that they have been demanding for their marks in vain but will not give-up now because they want to see their names on the final graduation list.

“Okuku says we chesKed in the examination, but how can over 400 people have the same issue?” He wondered sarcastically.

On search of the lecturer’s office, several unmarked scripts were found in the office. However, the dean of students Dr. Andrew State Erias promised to forward the issue to the Vice Chacellor, Prof. Barnabus Nawangwe and come up with a solution as soon as possible.

“We are going to give the scripts to other lecturers for remaking and very soon results of the remark will be out,” he added.

The strike was intensified by several guild candidates who wanted to show their solidarity to their dissatisfied voters.

The issue of missing marks is still dominant and has been cause of many strikes on college and university level.