Match preview for today’s game KU vs Ndejje. Game will be played at Villa Park.

Fresh from their impressive League win against a talented Uganda Martyrs University side, Ndejje University travel to Kampala University full of confidence.

The arrival of Sam Matovu and Andrew Katende at Ndejje seemed to have been the missing link in Komaketch’s project that had persistently underwhelmed for the best part of the season.

The quality of the two players, along with Luwaga Yunus’s resurgence in form has led to Ndejje playing some of the best football with in the League.

They have won their last 2 fixtures in the second round maintaining a perfect record since their opening day draw to Nkumba University.

However confidence is also high at Kampala University especially after their victory against stubborn Makerere University at Makerere grounds where they were good value for their win. That made it back to back wins for Vincent Tumusiime’s men who are unbeaten with in the League.

Key to their form is Abel Eturude who has scored one goal in the league this season and has the talent to change a game instantly. In the first round Kampala University beat Ndejje 2-0 in Ndejje.

“Ndejje will give us a real test as they have greatly improved, it will be a physical and tough game but we are confident to take all the points since we are at home” stated Vincent Tumusiime Hasule Edwin and Mugume Brian are responding well to treatment and may be available for Selection for Kampala University. 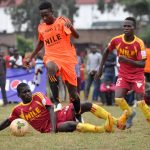