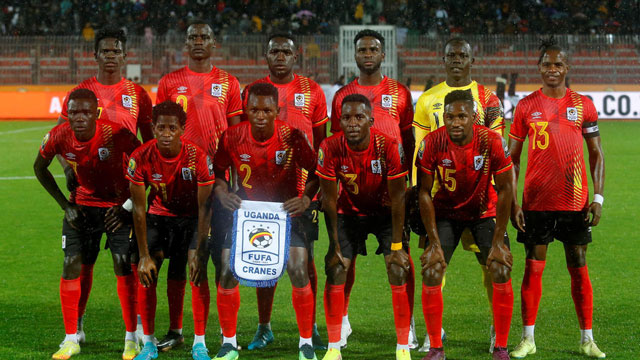 Uganda Cranes secured a crucial 1-0 victory against Senegal to go on top of group B at the Total Energies African Nations Championship at the 19 May stadium in Algeria.

In what was a highly contested match, Milton Karisa’s half-time goal against all odds was enough to save Uganda’s maximum points on a rainy Wednesday night down in Annaba.

This is Uganda’s second win at CHAN in seventeen games they have played at the tournament where they have been regular participants since 2011. But, besides Milton Karisa’s goal, the biggest credit will go to goalkeeper Nafian Alionzi for the masterclass performance he exhibited against the Terranga lions, making a couple of saves including a penalty and an indirect free kick.

The Cranes Head coach, Milutin ‘Micho’ Sredojevic made one change from the starting lineup that faced DR Congo and opted for a more defensive, midfielder Kenneth Semakula who started ahead of Karim Watambala. The match began at a high pace with the Senegalese speedy and physical players bullying Cranes players who were on the receiving end in the opening minutes of the game, and four minutes into the game, Uganda was saved by the woodwork off Cheikh Diouf’s header.

Senegal still had an opportunity to get a leading goal ten minutes later when Camara Lamine had a powerful shot on the goal but Alionzi was equal to the challenge. Another tense moment for the Cranes came in the 19th minute when defender Geoffrey Wasswa played off a poor back pass to Alionzi, which was tapped by Senegal’s Malick Mbaye on the way compelling Alionzi to use his hands to save the ball, earning Senegal an indirect free kick.

However, Alionzi was good enough to save Lamine resultant near-post shot. Just a minute later, Uganda Cranes striker Frank Ssebuufu also fouled Moussa Ndiaye in the box and Uganda Cranes suffered a penalty, but, Alionzi once again showed up a time when his side needed him most, stopping Tidiane Sidibe’s effort.

The save reactivated Uganda Cranes, which began to stabilize on the pitch, making a few attacks and gaining more control of the game. In the 33rd minute, Captain Milton Karisa scored Uganda’s only goal of the day by tapping in Ssemakula’s cross, giving Uganda a 1-0 half-time lead.

In the second half, Micho responded with an early substitute, introducing Karim Watambala to replace Marvin Youngman. Uganda would have gained an advantage six minutes into the second half when Karisa won a penalty after being brought down by Cheikhou Ndiaye but it was overturned by the Video Assistant Referee- VAR.

As the game unfolded, Senegal went a man down when their substitute Libasse Ngom received a red card for dangerous play on Watambala with seven minutes to go. But this appeared not to be disadvantageous to the Senegalese who continued pressurizing Uganda but failed to be clinical on a couple of occasions.

Uganda now leads the group with four points after two games, followed by Senegal with three points, while DR Congo, which was held by Ivory Coast in their second game, is third with two points.

“First of all, I want to thank the almighty God for having enabled us to get the maximum points we have been preparing so hard for, the team has given its best, and we are really proud of ourselves because this was a team win. Our target was to qualify for the knockout stage, we came to compete so were are trying to make our goals come true,” Uganda’s Kenneth Ssemakula who won the man of the match award said after the game.

Uganda will play Ivory Coast in the final group encounter on Sunday. A draw will be enough for them to qualify for the knockout stage, something they have never achieved.