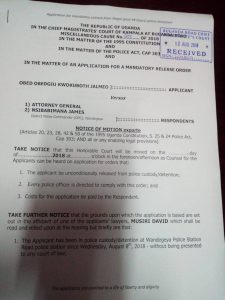 One of the Makerere University students who were suspended, Derrick  Obed has sued the District Police Commander at Wandegeya (DPC) for illegally holding him under custody beyond the legal limits of 48 hours.

It is alleged that, while on his way to pick the suspension letter,Obed was brutalised by Police under the orders of the Makerere University Chief Security Officer ASP Abaine at the main building.

The applicant also adds that he was taken to an unknown place over unclear reasons with Police claiming he was illegally on the University premises according to the suspension letter he received later that day.

It is on these ground that Obed’s lawyers decided to file a case against the DPC of Wandegeya for illegally detaining a suspect Without being presented to any courts of law.

However, the accused, while in court claimed that Obed assaulted Afande Kato on the 8th of September and also  beat up the former and this incited the audience into laughter.