Olowu Taiwo David who is professionally known as Eltee Skhillz is a Nigerian singer, songwriter, and dancer.

He was born on the 29th of May and hails from Ogun State but was born in Lagos State, Nigeria. Eltee Skhillz is the son of late veteran actress, Henrietta Kosoko and the step-son of veteran actor, Jide Kosoko.

In what feels like a continuation of the Africa-wide trend which began with their singing and dancing collaborative effort with ODG, this could be African Collaboration with the biggest flex.

The Ghetto Kids is a dance group founded in 2014 by Daouda Kavuma and composed of children from the Katwe slum in Kampala, Ugfanda.

Tunakupenda in Swahili meaning “We Love You” is surely going to go places, especially across the beautiful continent of Africa. 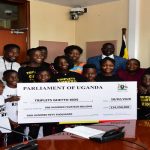