The Luweero based institution (Ndejje University) garnered a total of 98 medals that included 34 gold, 28 silver and 36 bronze.

“We are so delighted. The victory for Ndejje is a manifestation that our university’s investment in sports facilities, recruitment of athletes has eventually reaped fruits” an excited Paul Mark Kayongo, the sports Tutor and Bursar at Ndejje University confirmed to The Campus Times.

In some of the individual disciplines, Kenyan Methodist University won women’s football with Kyambogo taking the men’s version played on a round robin format.

In swimming, Kampala International University (KIU) were the kings sweeping a massive 20 gold medals in both the men and women categories.

Chess (both men and women) was won by Makerere University with Uganda Christian University (UCU) becoming second in women as Nkumba University played second fiddle in the men gender.

Nkumba University ruled the Volleyball world taking both the men and women titles and so did hosts, UCU in the Basketball circles.

It was an all-Kenyan affair in Hockey. Strathmore University beat compatriots Jomo Kenyatta University of Agriculture and Technology in the men’s event.

Egerton University from Kenya won the inaugural edition in 1999.

Over 5000 participants from 48 universities were part of the games in 18 different sporting disciplines.

It was the first time a private University hosted the games. 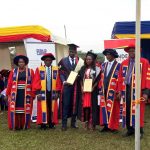