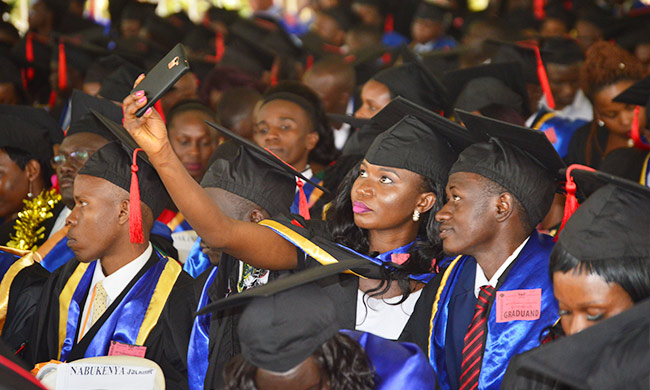 The Academic Registrar of Makerere University has asked all Colleges to display the provisional graduation weeks before the graduation.

Professor Buyinza Mukadasi issued the directive in a letter dated 9th January 2023 addressed to all principals, deans, and Heads of Departments. The directive comes two months before the graduation ceremony of more than 12,000 students that will be held from February 13th to 17th 2023.

For several years, students have been missing graduation on grounds that their names did not appear in the graduation book after failing to beat the deadline of updating their marks on the students’ portals.

“The Students Guild Executive has informed me that some Colleges/units have not displayed the provisional graduation lists to enable the students to scrutinize, raise concerns and suggest corrective action(s) before final submission to the Academic Registrar on Friday 13th January 2023.” Reads part of the letter.

“The purpose of this letter, therefore, is to remind you of this outstanding procedural requirement and to request you to immediately display the interim graduation lists.” reads another part of the letter.

Meanwhile, another letter dated December 23rd, 2022 by the Academic registrar addressed to all principals, deans, and Heads of Departments that URN has seen indicates that although the Colleges had presented statistics of graduands, the Senate at its special meeting on 22nd December 2022 noted several challenges including;

“The statistics presented from colleges were few compared to the ones that usually graduate, especially graduate students (Masters and PhDs). Most colleges were experiencing challenges with the ACMIS system where in some cases, the system graduated students who do not meet the graduation requirements, and therefore the lists have to be reworked manually.” reads part of the letter.

“The colleges/Other units had not received students’ results of College of Education and External studies, college of Humanities and Social Sciences; some results had not been uploaded unto the system by the lecturers; The graduation lists for graduate students were presented to the senate without the quality assurance and scrutiny by the directorate of research and graduate training, yet some requirements were missing.” read another part of the letter.

But a source that preferred anonymity says that apart from the Faculty of Arts and College of Health Sciences, many other colleges had displayed the provisional results, but the source made it clear that even those that displayed provisional results had very few numbers.