Makerere University has postponed the Garrisa Solidarity march to Friday 10th April 2015 after a request from the Uganda Police force.

According to an emergency communique passed by Makerere university Guild president Bala David Bwiruka,  Uganda Police wishes to actively and fully participate in the march with Kale Kayihura as the keynote speaker.

However, the Force shall today Thursday 9th,  the day that was scheduled for the match,  be passing out officers at Kololo Airstrip with the president as the Guest of honor.

The students however,  carried on prayers and a vigil lighting up candles and flowers to remember the massacre victims.

The march shall begin on Friday morning from Makerere University Freedom square to Kenyan High Commission. 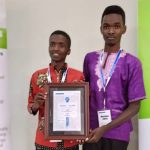