The Meg movie preview and Trailer 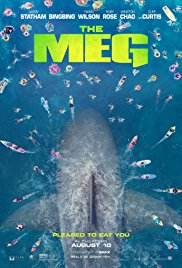 200 miles off the Chinese coast, a 75-foot-long prehistoric megalodon shark, thought to be long dead, rises from the depths of the ocean and attacks a research submersible, leaving its crew stranded. Diver Jonas Taylor (Statham) is called into action to help rescue the crew and stop “The Meg” before it attacks the mainland.