Two Makerere University students who came top of the Journalism class have received awards and one million Ugandan shillings cash prizes in recognition of their tremendous efforts to academics.

Lyn Tukei who was the best journalism graduate for the year 2019 also received a sum of one million shillings and the Tebere Mudini Award from Daily monitor.

The Cranimer Mugerwa was given to Betty Musasizi from Newvision in addition to the 500,000ush cheque as the year’s best student in photojournalism.

He was a first-class journalist in photography.

Mugerwa excelled in photography during challenging times. Jimmy Adriko, the former New Vision photo editor, said Mugerwa delivered quality work despite the challenges in the equipment at that time.

The Tebere Mudini award that is sponsored by Daily Monitor is in honour of former editors, Richard Tebere and Rashid Mudini who died in a gruesome motor rally accident in Karamoja in 1998. 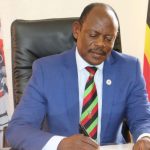