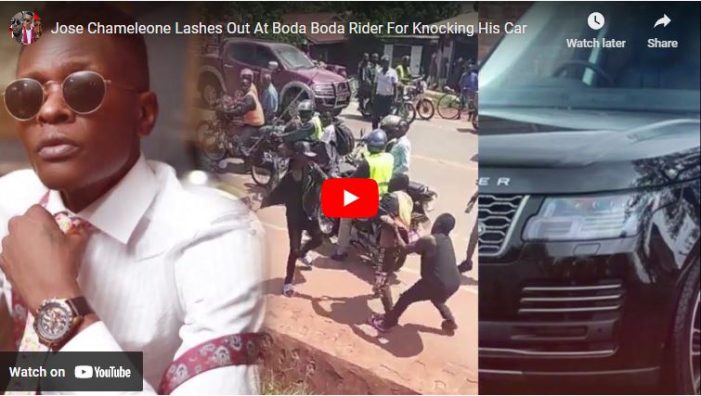 A video has surfaced on social media of singer Chameleone beating a boda boda rider who allegedly scratched his car, a Range Rover that was gifted to him in 2021.

Just three weeks before his much anticipated ‘Gwanga Mujje’ concert, singer Jose Chameleone has been dealt with a considerably big blow.

Watch the Video Below;

A video that was shared on TikTok by Yusuf Semakula shows the Leone Island chief exiting his car to beat a boda boda rider.

According to the voices heard in the video, on-lookers reveal that the boda boda rider might have knocked and scratched his car, a new Range Rover.

The singer lashes out at the boda boda rider with a big stick four times before people intervene. He then enters his car and then drives off.

According to the information gathered, the incident reportedly happened late last year in Seguku along Entebbe Road the road that goes to the singer’s home.

The video has attracted divergent opinions with a few netizens blaming the boda boda riders for being careless riders. Others, however, note that the violence showcased in the video is not befitting of a music legend.

VIDEO: Chameleone Lashes Out At Boda Boda Rider For Scratched His Gift “Range Rover” added by Miiro Allan on January 20, 2023
View all posts by Miiro Allan →