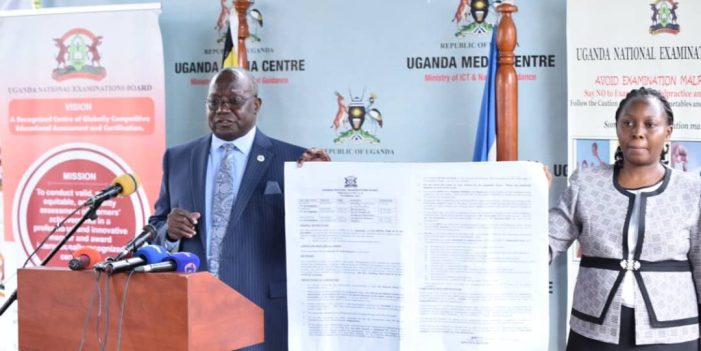 The Uganda National Examinations Board-UNEB has finalized mechanisms that will be used by schools to transmit students’ school-based assessments under the new lower secondary curriculum.

Unlike the old curriculum, which relied solely on the final Senior Four and Six examinations, the new O’Level curriculum was created to include classroom-based assessment throughout the four-year cycle, which will account for 20 percent of the final national examinations.

Although these school-based scores were meant to be submitted right from Senior One, this did not happen since the curriculum was launched in 2020 before most of the enabling mechanisms were not in place.

Now, Jennifer Kalule Musamba, the UNEB spokesperson, says with effect from term one of the new academic year, schools will be transmitting the continuous assessment scores using the UNEB portal.

“The ICT department has been working on the system. It is now ready. Schools with access to our portal will be able to post those assessments,” said Kalule.

She says that the board is currently working with the National Curriculum Development Center-NCDC and the Education Ministry to find out how this will be conducted.  She further notes that soon the ministry and relevant agencies including UNEB will provide guidance to schools and parents on how the system will be handled.

UNEB staff are undergoing training on how to manage this new evaluation as well as developing standardized instruments that schools will use to award marks. Our reporter has learned that the training is bankrolled and facilitated by the British Council in Uganda.

Many teachers, parents, and students have been asking how the marks would be transferred to UNEB now that the assessment format is being implemented. Another major concern has been about what would happen to the learner’s scores if he or she transfers from one school to another.

Available information indicates that every learner will receive a computer-generated Learner Identification Number-LIN on their first registration on the system to help track their performance even if they change schools. The process of allocating these numbers is already underway.

A source from NCDC also informed our reporter that pioneer students, (those who will be in S.3 in term one this year) will be assessed based on scores obtained in S.3 and S.4.

“Ideally, the curriculum requires that learners are assessed right from senior one. But, due to the disturbance we have gone through; COVID-19 disruptions, and the fact that the pioneers were automatically promoted we might not require their S.1 and S.2 scores but this has not been officially decided,” the source added.

As the transmission of scores to UNEB is soon beginning, there are concerns that some teachers lack the skills of carrying out the assessment.  The issue is acknowledged by Dr. Grace Baguma, the NCDC director, saying that this has been confirmed by the feedback they are receiving.

She however adds that NCDC is committed to offering training to ensure that teachers in both private and public schools are equipped with the relevant skills. “We are now providing training, and UNEB will soon join to assist us in making sure that teachers and head teachers are proficient in how these assessments are administered and scored. We recently experienced a financial crisis, which negatively impacted our programs but we think everything will be okay,” Baguma adds.

Under the new curriculum, teachers are expected to grade students on a scale of three, that is, one, two, and three in every topic or month. This is done to determine whether learners have grasped what they are taught in class and if not remedial activities are done before moving to the next topic.

Instead of having students wait to study for end-of-term exams, this evaluation technique focuses on making sure that students acquire the necessary competencies. The new system also aims to reduce the overreliance on final exam scores as a gauge of academic performance.

In recent interviews, curriculum developers at NCDC noted that they chose to provide a continuous assessment with a 20 percent initial contribution just as a starting point with an intention of gradually expanding its end result contribution to 50 percent.

The idea of having a continuous assessment is not new as it is being applied in many countries with strong education systems in Europe. In Uganda, it had been suggested way back in 1987 by Professor William Senteza Kajubi led Education Policy Review Commission and it was adopted in the 1992 Government White Paper.

However, its implementation at the primary and secondary levels was delayed due to the absence of enabling systems. In the mix was a question of integrity with many people worrying that this form of assessment could see teachers favor their learners or put them at a disadvantage for their benefit.