Festivals have become like air in Uganda, we cannot live without them. I mean if they said no more festivals around here, people would actually die or strike, whichever comes first. Anyways festivals are a part of us so we might as well talk about them and treat them like part of the family.

Rolex festival: This happened last weekend, and I’m telling you, Ugandans do not disappoint.

Everything and everyone was there. You had yourself slay queens and then slay kings, some slay slaves made an appearance and generally people who are not sure what their social status is.

So, for those of you who don’t know the Rolex festival, let me bring you up to speed, it is a festival that since last year happens every year, so this year’s festival was the second edition, as they called it.

Basically what happens is you eat Rolexes and show off clothes you borrowed from a boutique for the very reason of showing them off. Look at it this way, it’s like fashion week, with Rolexes. Simple as that. 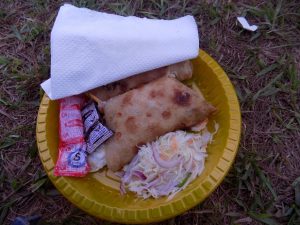 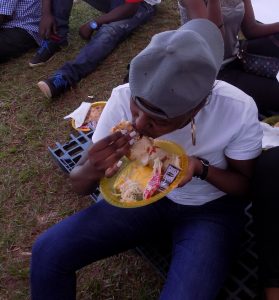 See, I don’t think people even go there to eat Rolexes, I mean yes but that’s definitely not the reason, it is all about showing off and finding yourself a party buddy who you will not remember in a week’s time.

It was actually fun. You have musicians, the actual ones, and then people who think they are musicians except their voices and work don’t quiet agree.

And then there was mc Douglas with his stunning shoes, seriously though where does that guy get his shoes, and then you had the dance crews some of which you would need a translator to actually understand  what they were doing and of course so much music and cocktails to wash down the ridiculously expensive Rolexes. That’s pretty much it. I recommend you look out for it next year, you never know, it might just be the break you need to earn the official title of slay king or slay queen.

Ice cream and cake festival: Am telling you, Uganda has outdone its self. Anyways so for this festival, you take a lot of cakes and ice-cream and then pray to the almighty that you don’t live a life of diabetes. 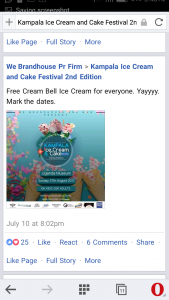 It is happening this Sunday the 27th so be sure to drop by. Word is acts like Sheba and others will be there, so you will have that going for you.

I know I will be there because come on, some of these things you just have to witness yourself. So ladies or guys, grab your girlfriend, or that girl you hope will take you out of the friend zone and take them to the festival, nothing says you are in love with someone like ice-cream or cake. Or if you are just a cake and ice-cream lover, take yourself and if you don’t have the money lie to your amazing parents that the university needs you to pay 20k for development, in other words just make it work.

Like we have already established, Ugandans are quite the unbelievable ones. But there you have it. The colour festival is in September.

For this festival you celebrate colour, whatever that means. Apparently it is a day to have fun with colour, play with colour, generally be colourful, and while you are at it rainbow your look up. 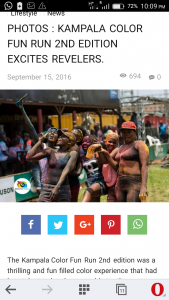 This year’s festival is also going to be a second edition and it is quite financially outstanding than the ones I have talked about before, but that is no worry, I mean who does not want to just play around with colour.

At this rate we will have festivals for hair or nails or just about anything. You have the Kampala festival coming up, and let’s just say it does not disappoint, then there is the beer festival and the twin’s festival that was on 20th august (it is safe to say it was quite the humorous event).

Word is there is a shades and shorts festival coming up and many more. I’m telling you it just gets better, just watch out for that one, my gut tells me you will not want to miss it, I know I don’t.

Anyways I hope you go spend your money or your boyfriend’s money, preferably the latter and just have a good time. After all life is too short, so let Uganda and its numerous festivals take care of you.