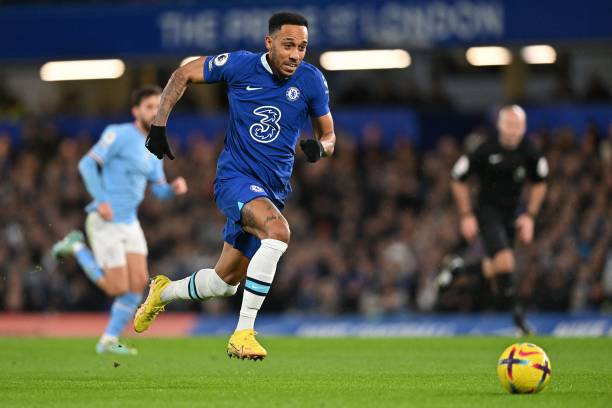 Pierre-Emerick Aubameyang is reportedly desperate to leave Chelsea this January.

The Gabon international has not start a single game for Chelsea since November 2022. Aubameyang is struggling at Chelsea. He has only scored three goals in 16 matches across all competitions this campaign.

According to daily mail sport,  Aubameyang would be willing to return to Barcelona and play ‘almost for free’ to gain more first-team action. This would only happen if Memhis Depay leaves.

It is believed the 33-year-old would accept whatever amount the Catalan giants could afford to pay him following Depay’s departure.

Aubameyang’s desperation comes after a disappointing spell at Chelsea. The former Arsenal captain has struggled to cement a place in Graham Potter’s squad and finds himself on the bench more often than not.

Aubameyang was left feeling somewhat embarrassed after his dismal performance against Manchester City on January 5.

He started Chelsea’s tie against City on the bench but made his way onto the pitch after just five minutes as Raheem Sterling was forced off injured.

However, Potter was less than impressed with the striker’s performance and decided to replace him with Omari Hutchinson in the second half.

Aubameyang was then left out of the Chelsea squad that lost 4-0 to City at the Etihad Stadium on January 8.

Many thought Potter had dropped the Aubameyang after his performance during the week. However, the Chelsea boss denied such claims.

He said Aubameyang was suffering with a back issue that prevented him from being fit enough to play in their FA Cup tie.