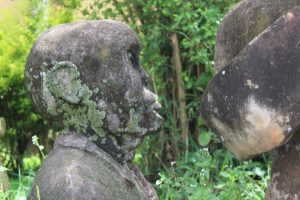 From time memorial, history, knowledge and culture has been passed on and preserved for consumption by new generations through verbal, visual and written forms.

Often the responsibility of historical information was consigned to professional historians, trusted individuals whose superior wisdom and training equipped them to remember and interpret vast stores of information for the benefit of the community. (met museum.org)

Important individuals were often immortalized in sculptural traditions that venerated the memory of past rulers.

At Makerere University, Uganda’s most prestigious University with over 95 years of existence, sculptures have been one way of preserving this information. They have given the university a distinguishing look and also as a community that appreciates art as a means of communication. 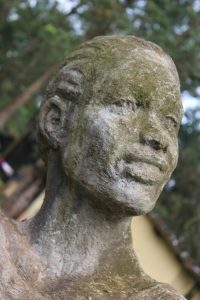 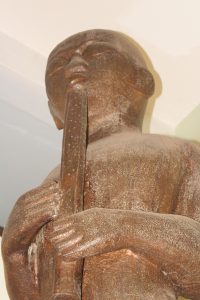 The flute boy: “HOPE AND RESILIENCE”, As one enters the main library, he is stricken by a large brown boy seemingly lost in thought playing his flute, the sculpture goes up to the first floor and a clearer glimpse of it can be gotten when one gets onto the other floor. Donated by the Rockfeller foundation and carved in copper and wood by professor Francis Nnagenda, it celebrates the return of peace to Uganda which followed the political instability and wars of the 1970’s and the early 1980’s. 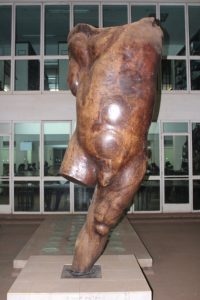 The war victim, this was designed to remember the lives of people lost in war and also to portray the resilience of the human spirit in Uganda. This is found in the old extension of the main library in the Africana section. It is of a beheaded and decapitated man standing on one leg with one arm.
Birds on top of a woman, this is the biggest in the main library, it has a woman pouring something from what seems to look like pot and birds over her, coming to feast from what is on the ground. The lady occupies the ground floor and we see the birds all over the rest of the floors.

“Birds on flight” above a woman, this is the biggest in the main library, it has a woman pouring something from what seems to look like pot and birds over her, coming to feast from what is on the ground. The lady occupies the ground floor and we see the birds all over the rest of the floors. 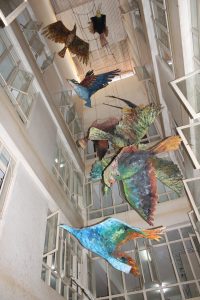 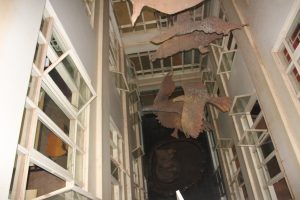 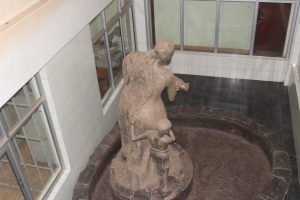 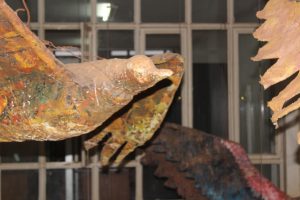 One who has trolled the university campus, can’t fail to notice a few that stand out and hold a semblance to the Makerere community. 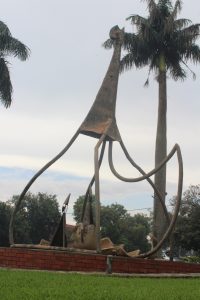 The golden jubilee monument, titled hatching a new generation, the sculpture was designed by professor George Kakooza in 1943-1983 and completed during the platinum jubilee celebrations of the university in 1997. In it we see two hatch-lings standing next to broken egg shells in a nest. 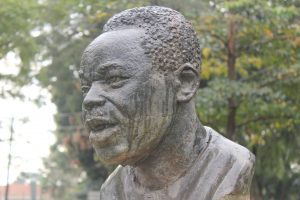 Mwalimu Julius Nyerere, opposite the central teaching facility 1 and next to the faculty of arts is a dark skinned bust of Mwalimu Julius K Nyerere that was installed at the celebration of the 50 years of the university of East Africa. He was the chancellor of the University in 1963-1970. The sculpture was unveiled by president Yoweri Kaguta Museveni in 2013. 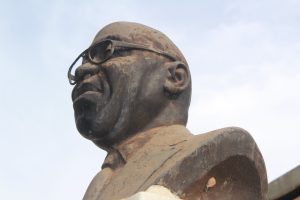 Professor Senteza Kajubi, for his contribution towards education, he was sculptured in recognition of the 60 years of exemplary service to education as a teacher, trainer, administrator of tertiary institutions, and education policy advisory. This is located at the school of education and next to the early childhood center. 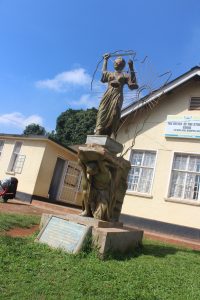 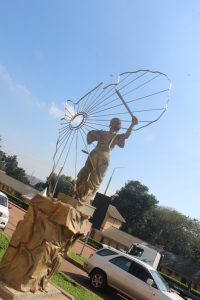 Struggle for Justice in Africa Monument, this was put up in commemoration of the 2018 annual justice week through the 85th guild minister of justice and constitutional affairs Hon Owiny Mark Anthony. It is situated right in the front of the Guild offices near the Eastern gate. 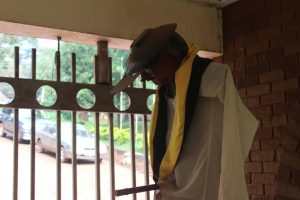 Gongom, the first thing you set your eyes on when you enter the hall is the Gongom sculpture. This is a monument that was introduced by former students including the current LT Gen. Elly Tumwine. Gongom was a gatekeeper of the hall in the early late 1970’s. Amin’s soldiers wanted to enter the hall to evacuate students but Gongom denied them access which prompted the president to order the army enter the hall forcefully and on entering he was shot dead. The students at the time sought to honor and remember him by designing a sculpture of him and named it after him.

The elephant is the hall’s symbol and according to the residents of the hall it traces its origin from Patrice Lumumba who was from Congo and had lots of elephants. 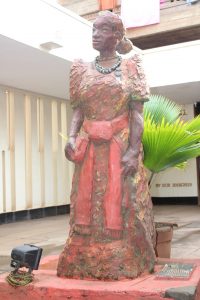 Gongomesi is the only sculpture at the hall and is of a woman whom residents believe to be the wife of Gongom a sculpture of a man at Lumumba hall which is a stone throw away. Clad in a red “gomesi”, a handbag, a beaded necklace and a scarf on the head. Residents believe it represents a Ugandan woman and also a symbol of solidarity. 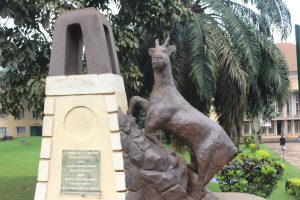 The goat is the hall’s symbol and residents refer to the area as the goat land. 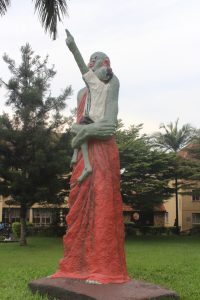 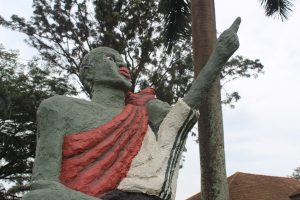 Another sculpture in the hall is “Mama Kakyala” that was put up in 1968. The hall chairman says she used to sell local brew to the hall residents after the opening of the hall in 1857. A group of 9 people that stayed in the hall then decided to honor her and make a sculpture of her.

Residents of this hall refer to themselves as gentlemen. The sculpture at their hall is called “Livingstone”.

Mitchell hall
As you enter the premises of the rat land, a sculpture of a big rat is visible and it is this that the residents hold dearly and it is their symbol as a hall. Residents believe a long time ago the area used to be infested with rats and thus the symbol of a rat. 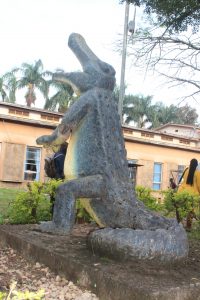 A crocodile identifies complex hall and its origin is traced back to the times when the hall would flood but students persisted staying in it.

Osagyefo is another of Kwame Nkrumah’s name. A sculpture of him sited in a white and green Ghanaian smock welcomes you to the hall. 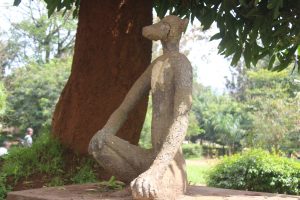 In the parking lot is a sculpture of monkeys in a line and another on its own. This is the hall’s official symbol and it is referred to as a “lollipop”. Mr. Katabira Douglas the hall custodian says tracing the symbol and its significance is hard as records are lost in the process of switching staff. 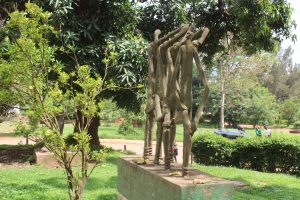 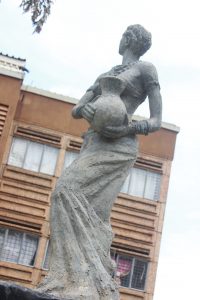 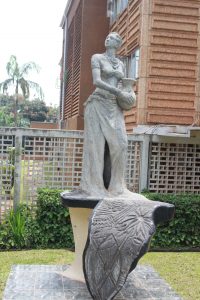 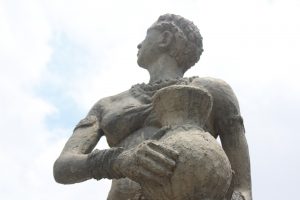 The hall has a sculpture of a woman with a pot and it represents a true African woman. 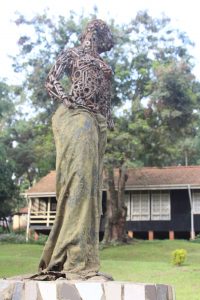 The guidance and counselling compound has a number of these with not much details written on them, passersby believe these were student projects that were done in the previous years. More of these art pieces are in various points of the university including the Art gallery compound next to the School of Education 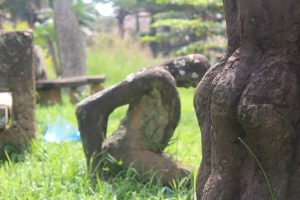 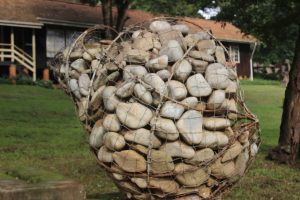 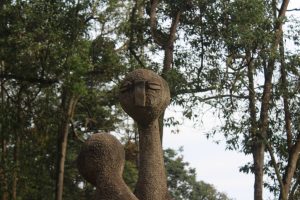 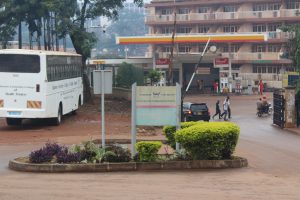 On how the sculptures come to be placed at the University, Mr. Okello Patrick from the Estates and Works Department, says management has a committee that sits and decides what sculpture is suitable and their role as the department is to gazette the proposed area to ensure it is not in areas like road reserves.