The police have launched a man hunt for city socialite, Charles Olim also known as Sipapa over alleged involvement in a robbery in Kampala in which over shs1.6 billion was stolen.

According to Police spokesperson, Fred Enanga, Jacob Arok, a South Sudan national and resident of Bunga in Kampala was robbed on the night of August 28, 2022 when unknown men broke into his home after applying suspected chloroform to the occupants.

“The thugs ransacked the home and stole cash amounting to $429000(Shs1.6billion), four Iphones, apple laptops, dell laptop, gold jewelry for the wife and a 65 inch Samsung tv among others,”Enanga said.

Enanga  revealed that when the South Sudan national reported the matter to police, detectives tracked one of the phones stolen and following this lead, the signal led them to a home in Buwaate, in Wakiso district.

“Our detectives tracked down an  iCloud  from one of the phones stolen from the home and led them to a location in Kityo close in Buwaate in Kira division. When we interviewed the occupants, they said the house belongs to Sipapa whom we didn’t find at home but had travelled to Tororo.”

The police spokesperson said since the hunt started, Sipapa has not resurfaced at the home, noting that having been forced to surrender his armed guards, he is now moving with bouncers to protect him.

“A serious man hunt for Sipapa who is urgently needed is ongoing whose last appearance was in Nagongera in Tororo where he was seen dishing out cash to members of the public. We are appealing for information from anyone on the whereabouts of Sipapa or the allegedly aggravated robbery.”

“We know he is aware of our hunt and is invasive. He has decided to move with bouncers after the military guards were withdrawn and now using bouncers as private guards but warn them that whoever is found with him will be charged for abetting crime and harboring a wanted criminal suspect.”

The development comes on the backdrop of Sipapa donating  food items to several villages in Tororo over the weekend.

“I am not doing this as a form of accountability because I don’t work for any organization. I have been doing this for quite some time and I will continue doing it to support my people who were with me during the early days of my life,”Sipapa said.

Previously, Sipapa has been accused of behaving with impunity. 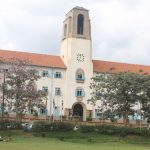