In a release from the office of the guild president Makerere University students guild, it is alleged that Stanbic bank is making errors to the students accounts so as to make students run to the bank and open accounts with it.

According to Bala David, Makerere university has been sending money to a number of students in batches but those with accounts in other banks have been having their money bouncing back due to wrong account numbers.

“According to investigations I have done, the University sends internship money and the correct information to Stanbic Bank which is supposed to then disburse the money to other banks but it appears that Stanbic Bank chops off one digit of the account numbers of some students who bank with those other banks such as Centenary Bank, Crane Bank, DFCU,” Bala said in his facebook post.

It should be noted that before the students went on strike recently over their internship allowances, over 200 students’ accounts had bounced.

This prompted the guild officials to open up offices to cater for all students with the mistakes to re-register with them at the students’ leaders’ offices.

Because of the errors that stanbic bank commits deliberately, the money bounces and its not reflected on the students accounts.

“ When Stanbic sends the money to other banks, the money bounces back and those students who bank with that bank end up not receiving their internship money since Stanbic sent incomplete account number information,” Bala noted.

It has also been established that those students with bank accounts in Stanbic receive their money instantly which students leaders say it is unethical such a commercial bank to have a monopoly over money.

“As a result, students who bank with Stanbic get their money on time while some students from the same faculty but banking with other banks take long or fail to receive their money on time. With this trend of events, students are then driven to open accounts with stanbic bank “since it processes their money faster”,Makerere university Guild President added.

The students are yet to pronounce another strike over unfair treatment.

On Friday June 19 2015, Makerere university students lead by their leaders rose up to demonstrate over delayed internship facilitation.

It is also noted that students have so far spent about one month in internship with the biggest number still struggling to receive their internship facilitation.

Every student doing internship is supposed to have received Uganda shillings 378,000.

Efforts to get a comment from Stanbic Bank management over the allegations were futile.

Student collapses after missing out on Makerere University Admission list 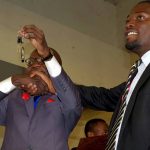 Photos: Swearing in Ceremony of Papa Were Salim as Makerere University Guild President 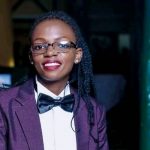