Uganda is more than the beauty of the Pearl of Africa

The beauty, wildlife, diversity, and the hospitality of Ugandan people made Winston Churchill to refer to Uganda as ‘The Pearl of Africa.

Uganda is now proud of the growing literacy levels despite the increasing unemployment rates. With 8 public universities and over 30 private universities.

There  is no more war in Northern Uganda though corruption is worrying us more than the way Joseph Kony used to worry the sons and daughters of Adam in Gulu.

We see more dams being constructed for power generation, but more students are using candles for revising during preps due to endless power blackouts. 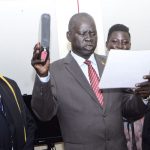