So far, 9 students  including a lady are planning to vie for UCU Guild President.

These include 3 from the Business faculty(2 are in BBA), 3 from the faculty of education and arts (2 from Mass Comm), 2 from Law faculty and 1 from science and technology.

No one has surfaced so far from Social Sciences(BPAM, SWASA and Dev’t Studies

A former Guild Presidential Contestant who was vetted out in the last Guild elections is seriously in campaigns again while a senior strategist of one of the 2 eventual losers in the last presidential elections is also clandestinely garnering for support.

Meanwhile, for Parliamentary elections, the race for MP Law seems to be the one leading as 7 people are said to be harboring ambitions, come September semester and amongst these, the leading ones being talked about are Bangi Sayid, Attorney General Hon Namara Keith Kyaruzi, Bismarck, Ojakol Ivan and Mugombesha Gilbert “Javier”.. 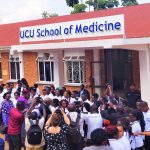