The inter-university debate competition started on 19th and ended on 25th August, 2019.

Cavendish University emerged as the best in Public speaking category being presented by Collins Bulakyalo a student.

The competition was recently hosted by other countries that include: University of Rwanda (Rwanda) in 2016 & 2017, Kyambogo University (Uganda) in 2018 and recently Cooperative University Karen, Nairobi (Kenya) in 2019.

The competition started in 2016 by Aspire Debate Rwanda and takes place each year in a different country with in the East African Community.

The next competition will take place in Arusha, Tanzania and the finals at the East African Parliament next year. 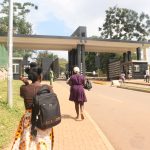