He beat Aziz Mujuzzi who got 746 votes out of the total votes cast.

Kassim will be taking over from Abubakar Matanda who was recently sworn in as Uganda National Students Association (UNSA) President.

He has been warmly congratulated by many students.

“Thank Allah that da day has come to an end, l want greet u all and congs to alk camps, elections a done,we share a common goal and cause 4 the institution and students,lets work together, this done bt theres alot ahead of us….Wish u a sucsful IUSU Gov’t 2014/2015”, Ibrahim Ngako says.
Ibrahim Wabwire wrote, “Thx for participating in votting, for those who voted wizely Alhamudrillah, en those who followed, next tym try to be followed, But what next is working together to represent students’ issues” 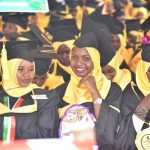 Two nominated for Guild Presidency at Islamic University in Uganda