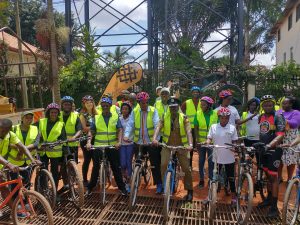 The Kampala Capital City Authority together with the Institute For Transportation and Development Policy ( ITDP), the First African Bicycle Information Organization (FABIO)and UN-Habitat has initiated and encouraged the use of bicycle for transport within the town as a solution to combat air pollution.

A 5km High-level bike ride around Kampala aiming at creating awareness about the intense pollutions in the city has been organized on Friday starting at fairway hotel.

The minister of state for kampala Kabuye Kyoffa Togabye officated the flag off ceremony and described that Earth’s inhabitants especially the humans are at crossroads with the increasing pattern of global warming engineered by thier actions against nature.

Kyoffa added that the environmental protection and sustainability concerns continue to be treated as side issues despite being a central development agenda.

“If not addressed, the future is in jeopardy and therefore such cycling awareness can make a great impact.” He said

He however noted, leaders of KCCA are working day and night to provide favorable environment for cycling such that people embrace it to minimize pollution, traffic and congestion in the city.

Government has put a strong foundation to act and enshrine all climate distorting acts within the public and private social spheres of the development spectrum among which include, the National Climate Change Policy that was approved in 2015 by Cabinet, the National Climate Change Act of 2021, which articulates the government’s response mechanisms to climate change among others focused at preserving the environment.

Fiona Nshemerirwa on behalf of the UN Habitat explained how their agenda is about creating inclusive city for all, safer city and sustainable cities.

” The UN Habitat aims at not only seeing vehicles in cities but a system of mobility meaning that to also people who walk and use bicycle.” She said.

Winstone Katushabe, the commissioner Transport Regulation safety MWT included that as a Ministry they have a duty to work on all roads and bycle lanes in kampala made so that people embrace cycling.

Katushabe strongly urged drivers to respect cyclist as they embrace the use of bicycle in the city.