On Sunday September 29, 2019, Ashiraf Nsubuga, a resident of Nsibirwa hall and  fourth year student pursuing a Bachelors of Medical Radiology at Makerere University committed suicide by hanging himsef on a rope.

Nsubuga reportedly had debts that had accumulated to a tune of Shs18million and was supposed to pay his debtors on October 2. His death shocked whoever learnt about it since this was the second suicide case reported at the University in a space of two Semesters.

Makerere University takes the lead in the number of suicides committed in the top five Public Universities in Uganda since 2010.

With the death of Nsubuga last month, Mak has now had five students commit suicide.

On September 16, 2018, Joshua Ajuna, a fourth year student from the School of Forestry was found lying dead in his bed in Nsibirwa hall with a suicide note informing his father that he had taken his life for personal reasons.

No case of suicide has been reported at Kyambogo University since 2010 while only one case has been recorded at Mbarara University of Science and Technology (MUST), Makerere University Business School (MUBS) and Gulu University respectively.

There has been growing concern over the increasing cases of suicide at Nsibirwa hall in recent times as students at Mak easily mention the hall when a conversation about suicide within the University starts.

Dickson Taremwa, a third year student at the College of Business and Management Sciences (CoBAMs) who resides in the hall says that residents in the hall are now looked at as people who come from a ‘very dangerous’ place.

Asked whether the comments about Nsibirwa hall are true, the Dean of Students, Cyriaco Kabagambe rubbished them saying that suicide is happening everywhere in the world.

“I am mourning the death of my son Ashiraf and I am devastated. But suicide is caused by problems which sometimes are external. We can’t say its about Nsibirwa hall alone.” He said.

Although the two recent cases have been reported in Nsibirwa hall, in the past there have been suicide cases reported in other residences within and outside the University as shown in a map below.

Black Icon= Areas where Students at Mak have committed Suicide from in recent times.

Dr. Henry Nsubuga, the Director Guidance and Counseling Centre at Makerere University says the causes of suicide are many and may differ in different persons.

Likely Signs that Someone may Commit Suicide.

Dr. Nsubuga says that a suicidal person may withdraw from his/her peers, they get detached from friends, relatives while others talk about it. He says that  those who talk about suicide are usually ignored by friends and unfortunately end up doing it. He adds that people with suicidal thoughts can be seen looking for places where they can do it from.

“Sometimes if you’re observant, you can even tell what they are trying to get because some people might buy petrol, ropes or whatever  they thick can help them commit suicide. ” He says

He notes that people who become overlay isolated are the easiest to detect that they might harm themselves adding that these might show a greater change in behaviour where for instance one resorts to drinking too much alcohol or drug abuse.

He urges people not to take such signs for granted if they become part of someone’s life.

Effects of Suicide on Other People

Although people who commit suicide usually do it for personal reasons, Dr. Nsubuga says that these leave behind bad memories that haunt their families, friends or workmates. He says that people who lose their loved ones due to suicide need counseling services and emotional support to help them avoid doing the same.

Nsubuga Ashiraf’s close friends say that when he died, they were traumatized and needed emotional support.

Sserubogo Samuel Gordon who shared a room with Nsubuga before he passed on says he was traumatized and scared to find his roommate hanging the fateful Sunday morning. He says that he was angered by people who didn’t care about his situation but always asked him why Nsubuga had decided to take his own life.

“I had spent only six weeks with him but people expected me to be knowing everything and kept on asking me. My parents picked me and asked the custodian to get me another room which he did when I returned” He said.

Nsubuga’s family couldn’t be reached to share their experience after his demise since our attempts to talk to his sister only identified as Lilian via a phone call were futile.

Mutangana Tyson, the 85th Guild Security minister says after Nsubuga’s death, his office worked with the Guidance and Counseling Centre in creating awareness about various offices students can visit in case they need support. He says that the University has done ‘enough’ in providing support by providing each hall of residence with a counselor. Although Mutangana says each hall has a counselor, an official at Nsibirwa hall who preferred anonymity says there is no counselor at the hall.

Dr. Nsubuga however says the Counseling Centre has written a lot of literature about suicide to help students and staff who might be facing challenges that could lead them into taking their lives.  He says they have briefed all staff members on how to give support to students who might be struggling emotionally or are depressed.

“We shouldnt be running just because one person has committed suicide and we forget others. After Ashiraf’s death, we received five students who were planning to commit suicide and we counseled them.”

He says their target is to increase mental health awareness so that students find it easy to share their problems and seek for support whenever they face challenges.

He adds that the centre plans to have a toll free line which students and staff can use in case they need to be helped adding that they also plan to use social media to reach out to students wherever they are.

Students however say the Centre hasn’t done enough and suggest that it improves its operations. 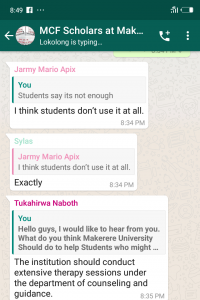 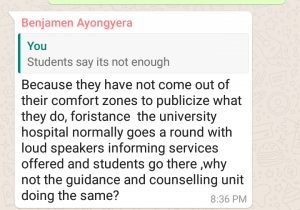 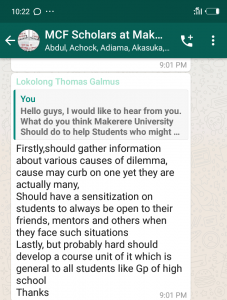 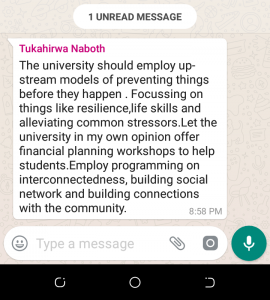 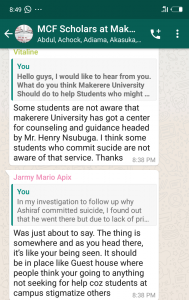 Students Suggest ideas on how to the University should address the issue of suicide cases.

A student at the College of Humanities and Social Sciences who spoke to us on request that her identity is not revealed said she tried to commit suicide but was rescued by friends.

She says however life became complicated after being rescued but she was able to heal because of her friends.

She revealed that suicide tendencies can be dealt with only if a person offers to ‘move the journey’ with whoever might be struggling.

“You need a strong support system. You have to tell friends the truth but these must be willing to understand you and help you understand that you’re not facing challenges alone.” She said.

She added that for one to be able to overcome the suicidal thoughts, they must be able to forgive themselves and stop keeping their pain as a secret.

“You dont have to put pressure on yourself to heal quickly. And by the way, life cannot become simple because one cannot handle” she added.

A report released by World Health Organisation (WHO) last month showed that Uganda was in 17th position on the list of countries where suicide is registered as a cause of death, with 18.67 per 100,000 deaths due to suicide in Uganda.

Annually close to 800,000 people die as a result of suicide which translates into one death every 40 seconds.