It has not been business as usual at the Banda-based University as freshers reported for their first day at campus.

The Kyambogo University new entrants who reported on Tuesday August 6, 2019 didnot receive a warm welcome from their soon to be staff members as most including wardens and custodians had ran away with office keys leaving the students stranded.

Student guild leadership led by people power‘s Jonathan Tundulu a.k.a “Tundulu Tundu”, together with 100 mentors made an initiative to make the already confused students feel at home. This involved conducting a simple orientation for the freshers.

The low mood and the situation in these public Universities is as a result of the government releasing only Shs15b in this financial year’s budget instead of the expected Shs150b to clear salary arrears.

On Thursday August 1, 2019, academic and non-teaching staff in all government Universities launched a sit down strike to prompt the government to stand by its promise.

However, the “lions” in this “game”, Makerere University seem to have pulled out. Yesterday, the Ivory Tower was so full of life as they received fresh students.

Freshers received a lit orientation and the whole campus busted with both teachers and students; everything seemed to be in its rightful order.

At the beginning of this week Vice Chancellor, Prof.Barnabas Nawangwe issued a letter addressing the staff issues.

The letter could have touched the staff’s hearts but with the giants out of the strike, we only left to anticipate how it will end. 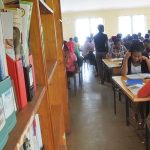