Timothy Kadaga who is currently the Guild President of Uganda Christian University (UCU) has cleared the air that he will not run for the post of Youth MP Eastern Region in the 2021 Uganda elections.

Kadaga says that he is still a student and he doesn’t want to mix academics with politics. He also currently has responsibilities as the Guild President at UCU.

“I want to clear the air about the poster that am will be running for youth MP eastern region, actual it’s a great position and am one person who wants to serve people and why not, but I just want to inform all of us that I will not be running because am still a student and the best thing to do as a leader is to prepare yourself to be able to serve people in the greatest capacity without hindrances. I don’t want to mix academics with politics” he said in a video post on UCU Twitter account. 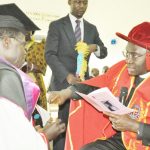 Uganda Christian University to pass out 1,136 at 1st part of 18th graduation ceremony